In Focus: The Man Behind The Camera 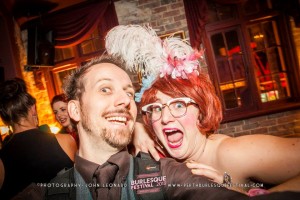 Let me introduce you to a wonderful gem of a guy: Mr John Leonard. Or as I like to call him; The Magical Clicky Photo Wizard.
If you haven’t met him personally you have likely seen and admired his handiwork and if you have been to a Sugar Blue Show you have almost certainly been photographed by him.

John is a humble fellow. So much so he doesn’t even have a Facebook page for his amazing stage and event photography. (But check out http://www.johnleonardphotography.com/ for some non-booby examples of his work).

No acknowledgement and appreciation of John could take place without a more general acknowledgement of the importance of photographers to performance art, in particular burlesque.

“Photography serves performance in many ways: by saving the ephemeral instant from disappearance, by composing a moment at its narrative and symbolic zenith, and sometimes by banishing from the frame all that may have distracted the actual witnesses of the event.”  Mark Alice Durant (Blogger)

Performance art is a live and dynamic creative expression. It is a moment in time that is the culmination of hours, weeks, months or decades of preparation and rehearsal that is shared with an audience and may be over in a matter of minutes. What documents it and gives it enduring life is, above all, photography.
Yet, photography is not merely commemorative or documentative, it is also interactive and instructive. We get a kick out of a well-timed snap but they also help us learn, grow and enhance our performances.

There exists an unspoken trust between performers and photographers. Let’s be honest, burlesque is an art form grounded in vanity and aesthetics. And yet,

iPhone, or schmucks with fancy cameras think they have the right to point and click at will and plaster photos wherever they like. In many regards performers can be a passive element in this dynamic. The moments are captured by a

photographer and control of what is shown and where may be largely out of our control. There is no greater gift than a live photographer that can capture a moment of your performance that is an exemplar of the character, the feeling and the narrative that is also FLATTERING. A sense of what is a flattering aesthetic, shape, face or body movement is an inherent skill and a photographer with an aptitude or proficiency in this is a performer’s best friend.

On a more personal level, John and his work have hugely influenced my development as a performer, teacher and all round human bean.

As a developing performer, seeing an image John captured of me during a performance of the Washerwoman Blues with Angelique Allure and Lulu Peekaboo was revelatory. I think my precise thought processes were “HOLY *@!%. Wait, WHAT? No way! … … … maybe I don’t look like the muppet I feel…”

Confidence. He inadvertently planted the little seed that germinated over time and I (and many others) am now pregnant with it (sorry John).

As a teacher this is something I have now seen a thousand times over. We have countless beautiful women come to our academy in search of a boost to their self-esteem and a jolt to their self-belief.
After their joyous and successful graduation shows John’s photos are shared many times over with proclamations of “That’s me!”. Heads are held a little higher, chests a little prouder and their struts have a little bit of extra sauce.

John also captured one of the top 3 highlights of my life so far in an image that just perfectly exemplifies one of the great joys of creative and performance arts; collaboration. In early 2013 I performed Dr Frisky: Sex Therapist for the first time and was gloriously mugged to the high heavens by my dear friends and performance partners: Kitty Litteur and Charlie D. Barkle. Riotous laughs were had, mascara was cried off and stage-rape ensued. This photo perfectly captures both the narrative of the act and the spontaneous comedic genius of both Kitty and Charlie.

Any ‘favourite photo’ list of John’s images that I could compile would be too long for the internet to handle so below are a very select few.

In sum, all photographers are treasures. I would be remiss if I didn’t also laud the outrageous talents of two other photographic geniuses in the Sugar Blue collective, David Woolley and Gregory Bruyer. Do peruse David’s photography page and Vintage Glamour Photography page, as well as trawling through t

They are even more precious than 10 gross of Swarovski Elements, and if you know me, you know what value I place

Next time you see John, David or Greg, give them a smile and a salute. They are the David Attenborough’s to our elusive snow leopards and must wade into the burlesque jungle avoiding various liquids, being glitter bombed and sparring with seat-stealing audience members.

Below are some favourite live photos of mine as well as other Sugar Blue Performers, and students! 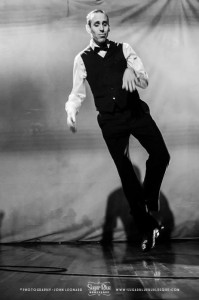 Charlie D. Barkle: “This photo is just so awesome it kind captures everything that Charlie is about, cool calm collected and sophisticated. JL just has such an amazing knack for capturing action and movement in a way that makes it seem so still and peaceful” 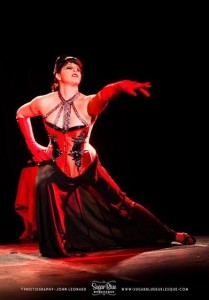 Fifi Fontaine: ”Whether it be a solo or a group routine John Leonard always manages to snap a great pic at just the right time. I love how he can capture the intensity of performance. He truley is a photographic master mind” 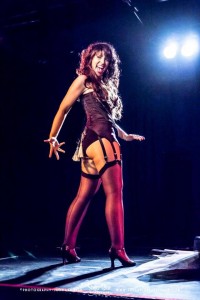 Sugar Duchess: “I actually really love how he’s able to capture you in the moments of ‘pure character’, as in, he’s able to capture the mood of your performance from a single moment taken from his clicking fingers! Seems an easy thing to do, but it’s really not. It’s an art.” 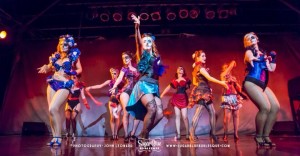 Shirley Temptress: “John Leonard The bravest man in photography for feeling the wrath of the sugar blue girls performance stage stares and sex eyes!! He always makes every girl feel beautiful candidly on stage where they may feel most insecure. As above picture shows, he never misses a fierce moment.” 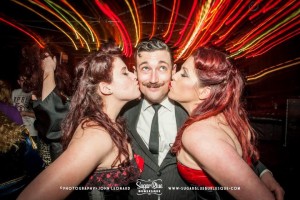 Brandi Cenin: “This would have to be one of my favourites that the amazing John Leonard has taken of me…it symbolises my new found love of burlesque from going to the shows for years…after Magnus got me up on stage TWICE and me thinking how amazing it would be to be up on stage alongside him and the beautiful sugar blue girls one day, this night John captured my dream come true…. being a sugar blue kitten!!!!” 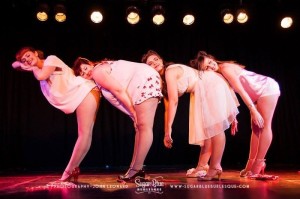 Brandy Bows: “This photo would be one of my favourites but there are so many, it was hard to choose. We all love performing and being on stage and this photo was the end pose of my first routine. Seeing the photos afterwards was the second best feeling after the performance. It brought back all the memories of being on stage, as well as giving an insight into how it looked to the audience. Sometimes with so many girls on stage, or so much happening at once, John does a great job of capturing those little moments. I know that I have been in the audience and watched the routine first hand, but looking at the pictures afterwards, you can see so many of those little features you missed at the time.” 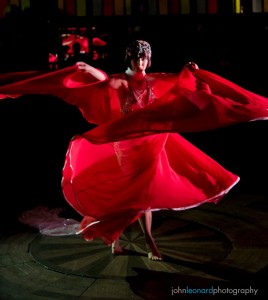 A’dora Derriere: “When I saw this photo that John Leonard had taken of me performing my Serpent Skirt Dance in the Artrage Spiegeltent during the first Fringe World Festival, I was speechless. He captured a moment in dance and showed this performance for what is what meant to feel like when watching it live!” 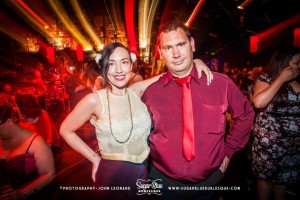 Rose Noir: “This photo by John Leonard is of my brother and I at Sugar

Blue’s Odyssey of Opulence show. I love it because it brings together two very different worlds in my life – the glamour of burlesque and the love of family. What I’ve always appreciated abut John Leonard is that he could very easily just focus on aesthetics – he’s a brilliant photographer surrounded by beauty all the time – but he is so down to earth and has always made me feel comfortable just being 100% myself” 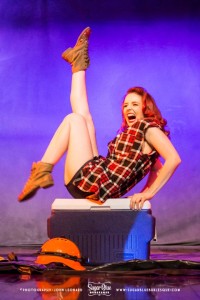 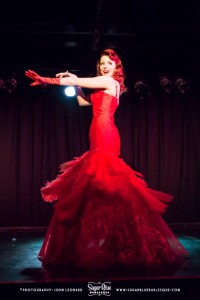 Ruby Slippers: The acts are my classic act created especially for Miss Burlesque WA 2013, and I love the photo because I think it captures my stage persona brilliantly. The other one is from my Bogan Burlesque act, debuted at the Triptease show, and he’s done a great job of capturing the whole essence of the act in a photo – the humour, the fun, the costume and props. He does a wonderful job of taking and selecting photos that really represent the performer and the mood they are trying to create! 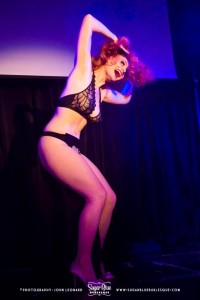 Ruby DeLure: “I love how John really captures the amount of fun we have performing, and a good face or two” 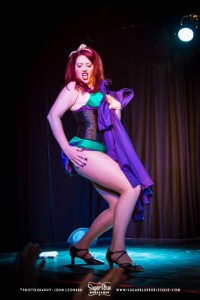 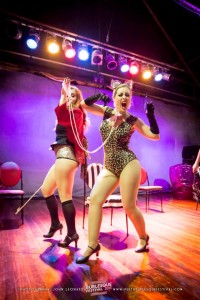 To the left is The debut striptease of Lucy Lovegun.

To the Right is a beautiful moment that captures the transformation of a once shy lady into a roaring sex-leopard. Chassis Capris and Shirley Temptress.
Chassis Capris: “John is a magician! He sees our shows through the smallest looking glass and captures our most defining moments with ease! I am always excited to see John’s view of my performances after each show!!” 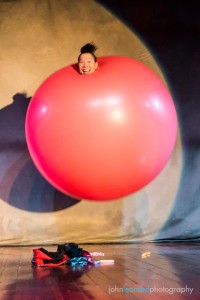